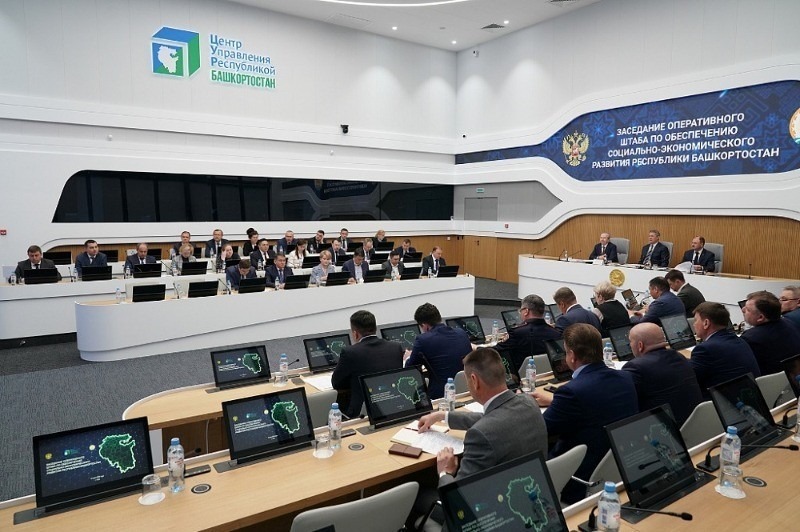 Particular attention was paid to the situation in the consumer market, industry, and ​​employment.

Speaking about measures to ensure the availability of food products, Deputy Prime Minister - Minister of Agriculture of Bashkortostan Ilshat Fazrakhmanov noted that in the first quarter of 2022, the index of food production in the region amounted to 109.7 percent (for comparison: in Russia - 103.2 percent ). In Bashkortostan, the volume of production of meat, meat by-products and semi-finished products, vegetable and butter, milk, pasta, bakery, and confectionery products is growing.

Within the framework of the republican food industry support program, enterprises can receive subsidies for the purchase of equipment in the amount of up to 50 percent. Federal programs have also begun to operate, providing for preferential loans in the field of meat and dairy processing, and bakery.

Radiy Khabirov stressed that by the end of 2022, it would be necessary to ensure a significant increase in food production. This is especially important in the context of ongoing sanctions from Western countries.

The Acting Minister of Trade and Services of Bashkortostan Azat Askarov said that employees of the Ministry of Trade conduct daily monitoring of pricing for the main commodity groups. The list includes 52 types of food and 19 non-food products, including building materials. In the area of ​​attention - 520 shops and markets.

“We see that prices and demand have stabilized,” Azat Askarov said. “The beginning of deliveries of crops from the countries of Central Asia contributes to the fact that prices for the main groups of goods gradually began to decline.

The Acting Minister of Health of Bashkortostan Azat Rakhmatullin reported that the necessary stock of medicines had been created in medical and pharmacy organizations. All deliveries are made in accordance with the concluded contracts. The Ministry of Health RB conducts weekly monitoring of their implementation. If difficulties arise, the ministry promptly takes action.

The Minister of Family, Labor and Social Protection of the Population RB Lenara Ivanova reported on the situation in the labor market. According to the results of the first quarter of 2022, a record low unemployment rate was recorded in Bashkortostan according to the methodology of the International Labor Organization - 3.6 percent (in Russia - 4.2 percent). The ministry specialists constantly monitor the situation at the enterprises of the republic.

The Ministry of Labor of the region has applied to the Government of Russia and has already received two federal tranches to support the labor market. Their total amount is 2 billion rubles, of which 188 million rubles will be spent on training and retraining the unemployed.

The heads of the cities of the republic also spoke about the progress in fulfilling the instructions of the head of the region to create the most favored nation regime for trade in products from personal and garden plots.

The Minister of Family, Labor and Social Protection of the Population of the Republic Lenara Ivanova spoke about measures to support and stimulate low-income families in rural areas.

“Specialists of the center now also receive calls from entrepreneurs who are interested in state support measures on hotline: 8 (347) 218-19-19. From March 3 to May 11, 656 businessmen addressed for the support”, Rustam Muratov said.