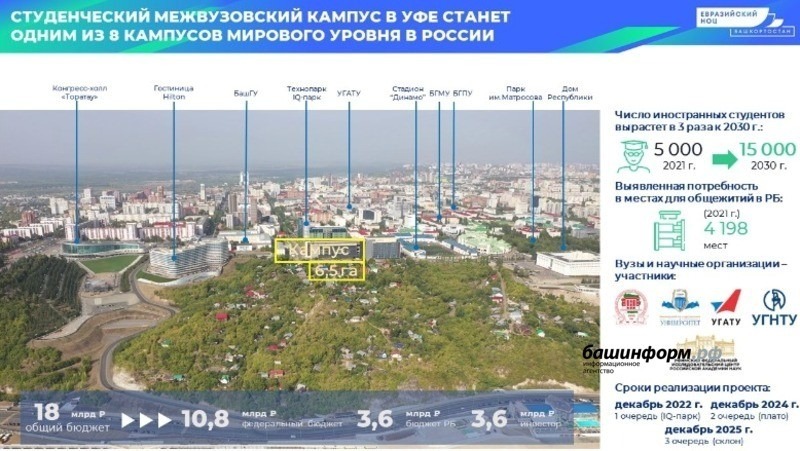 The Ufa facility is one of eight world-class student campuses planned to be built in Russia.

The Head of Bashkiria, Radiy Khabirov, announced this on his social media following a meeting discussing the facility's architectural and urban planning concept.

"We started this idea two years ago. In August 2021, it was supported by Russian President Vladimir Putin, and we appreciate this greatly. Thus, our campus was included in the shortlist of eight world-class campuses to be built in Russia," the Head of the Region posted.

At the first stage, the building of the High Technologies Technopark "IQ-park" on Z. Validi Street in Ufa will be reconstructed in 2022-2023. It will house coworking spaces, a digital library, offices of student companies, small innovative enterprises at universities, laboratories.

The second stage (tentatively, by the end of 2025) supposes the construction of modern student dormitories in the same area. The central core of the campus is more than 100 thousand square meters to accommodate 3500 students and graduate students. The campus will house more than just dorms. This is a whole scientific town, an educational center with world-class laboratories in different areas - genetics, photonics, climate, aerospace, and digital technologies, Radiy Khabirov said.

This version of the project was presented by Natalia Furman, Development Director of the Semrén & Månsson Architectural Bureau in Russia.

"Modern sports and public spaces, recreation areas, taking into account age categories, are also needed for full-fledged student life. We have much work in this direction. It should meet the interests of everyone - teachers, students, campus guests, so that the campus is modern, comfortable, cozy," the Head of the Republic summed up.