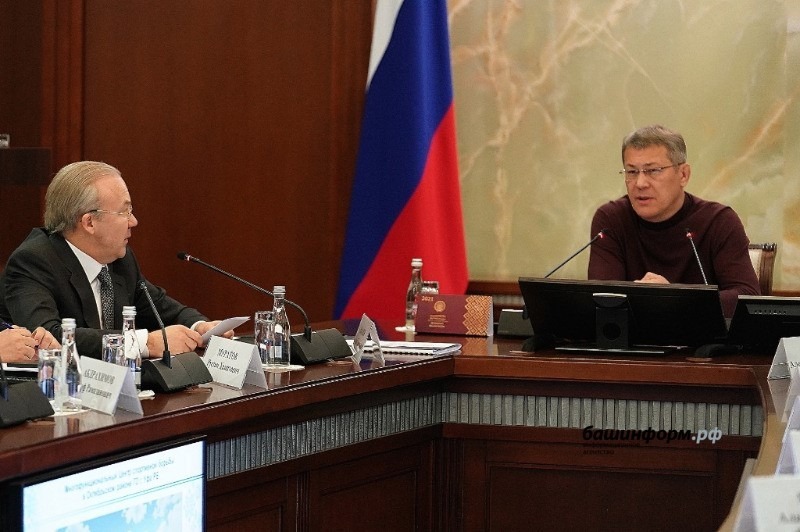 At the House of the Republic, the Head of Bashkortostan, Radiy Khabirov, held a working meeting on preparations to celebrate the 450th anniversary of Ufa, which will take place in 2024. The participants discussed projects of key structures and facilities planned for commissioning in the capital of the region.

The Prime Minister of the Government, RB Andrey Nazarov, presented the concept of a multifunctional Wrestling Center, which will be built in the Oktyabrsky district of the city. It will host international and Russian sports competitions, train athletes, and conduct certification of coaches and judges.

Among the anniversary sports facilities, projects of a rowing slalom complex and a fencing center were also considered.

Then Andrey Nazarov spoke about plans to build a Eurasian Library in the Kirovsky neighborhood of Ufa. Its concept is formed with the participation of the Ministry of Culture RB.

Another project in the field of education is the construction of a Mathematical Lyceum for 350 students with a dormitory for 250 places. Radiy Khabirov noted that the new lyceum should become one of the best examples of such institutions in the country.

The Chief of Staff of the Head of Bashkortostan, Alexander Sidyakin, reported the reconstruction project progress for Oktyabrskoi Revolutsii Street. The concept provides for the preservation of two-lane traffic, the renovation of buildings, some of which are cultural heritage sites, the expansion of the pedestrian zone, and the formation of comfortable urban spaces with modern planning solutions.

At the same time, the mayor of Ufa, Sergei Grekov, explained that by 2024, the facades of 90 apartment buildings would be renovated in the city.

The Head of the Region also instructed to start developing a brand book for the 450th anniversary of the capital of Bashkortostan, which would be used in the preparation of cultural events, decoration of festive venues, transport, trade, and service facilities, and various souvenirs.