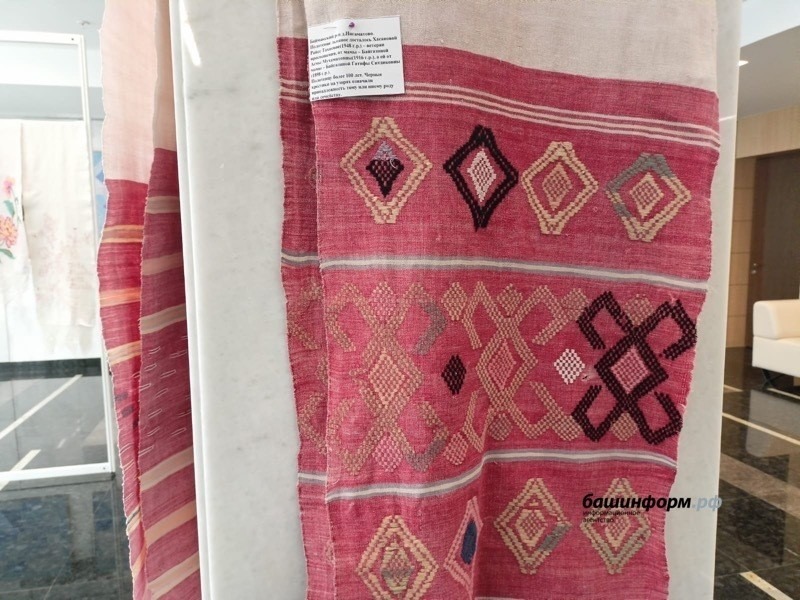 An exhibition of towels "The Embroidered History of the People", dedicated to the Day of the National Costume, has opened in Ufa.

The exhibition featured towels woven and embroidered by Bashkir craftswomen over a hundred years ago.

The opening of the exhibition was preceded by a solemn procession on the square in front of the State Concert Hall "Bashkortostan" of the participants of the gala concert  - Children's Folk Choreography "Patterns of Friendship".

The exposition presents a collection of towels from museums of historical and cultural centers - branches of the House of Friendship of Peoples RB. Visitors will be able to see authentic folk works - towels of 12 peoples living in the republic.

For example, the Tatar Historical and Cultural Center presented a towel that is over 100 years old. Amina Sakayeva, a resident of the village of Buzdyak, handed it over; she inherited the towel from her great-grandmother. Despite the considerable age of the towel, the color of the patterns is well preserved.

Often a towel served as a festive or ritual belt. For example, among the Udmurts, a towel acted as a protective charm.

The towel played an important role in the life of the peoples of Bashkortostan, accompanied a person from birth to death, was an important element in everyday life, and has survived to this day.

The exhibition featured four towels made by craftswoman Vera Tarasova and restored towels.

Many of them depict symbols with deep meaning. For example, embroidery with birds, with their heads turned to each other, means mutually shared love. This is a sign of prosperity and wishes for a fruitful marriage. With such a towel, parents blessed the young, it was a special shrine, which was not shown to strangers and was cherished, passing from generation to generation.

The exhibition continued with a festive gala concert. It will be open until April 17, 2022.