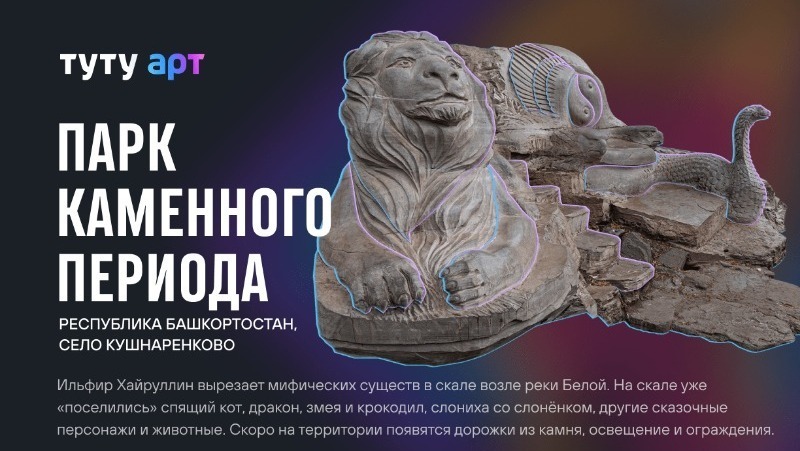 Trip and travel service Tutu.ru announced the start of the final round of the «TuTu Art» competition, which brought together the most unusual people's art objects of the country. In two months of qualifying rounds, 85 applicants were selected for the final from each region of Russia. A decisive battle is ahead that will define one, the most unusual art object. Voting has already begun and will last until January 24 (ends at 22.00 Moscow time).

One of the 10 most unusual people's art objects that will compete in the final includes Bashkortostan. This is a park of the Stone Age in the village of Kushnarenkovo ​​of the Republic of Bashkortostan.

"10 finalists from 10 regions of Russia are entering the decisive battle. Geography spreads from Rostov-on-Don to Magadan. Art objects are located both in large cities and in villages and towns. It is great that we have such a range of places and directions at a decisive stage. 14 exciting days of the popular vote are ahead. Every finalist has every chance of winning! " the founder of the community of travelers Tutu.ru Sergey Pishchulov, says.

Voting takes place on the competition page on the Tutu website. The final will take place from January 11 to 24. Anyone can vote.

After summing up the final results, the Tutu.ru team and journalists from major Russian media will organize an expedition to the object, recognized as the most unusual, to present its author with a commemorative sign of the winner. Moreover, the competition website will turn into a unique encyclopedia of the most unusual people’s art objects.

The competition is held with the informational support of the Lenta.ru edition.