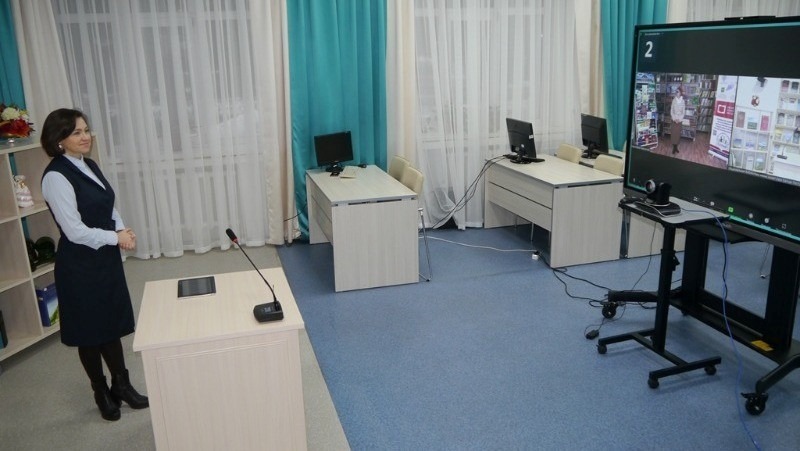 Today, based on the National Library, a solemn online opening of a new generation library took place in the village of Naumovka, Sterlitamak district. The library, modernized within the framework of the Kultura national project, was opened by Natalya Lapshina, First Deputy Minister of Culture of the Republic of Bashkortostan.

The ceremony was held in the form of videoconferencing. An automatic scanner of biometric data through a large-format screen requested the rights from the administrator - First Deputy Minister of Culture Natalya Lapshina, and after receiving them using an automatic counter, it opened the library.

Natalya Mikhailovna, having greeted the representatives of the Sterlitamaksky district, congratulated the library staff on opening a new cultural institution and emphasized that "the new model library is special because it is dedicated to family, family leisure and family values."

The model library presented information about itself, conducted a virtual tour of the institution. Employees of the new library and its readers - schoolchildren and representatives of the "third-generation" - spoke about the library's work and leisure activities in it, noting that the "Family" Reading Development Center is a great gift for the residents of the Sterlitamaksky district.

To meet the modern needs of the villagers, the library has high-speed Internet, modern computer and copying equipment, multimedia, sound, interactive, and information equipment. It also has a distribution station that allows you to register publications for an electronic library card.

The model library of the Naumovka village, the Sterlitamaksky district, is already the eighth new generation library in the Republic of Bashkortostan. Six more libraries are expected to open in the republic by the end of the year.